Rape In The Military

Women enter the military to change their lives and to serve their country.
Rape should not be their reward. 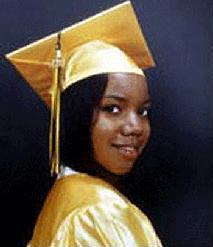 If your father, brother, cousin or uncle served in the US Army in Iraq in 2005 you may be looking in the face of a rapist and a murderer. Your male relative may be free because the US Military finds it easier to conceal rape and murder in its ranks than dealing with it. Why bother and ruin the careers of a few good men. Besides what does the death of another Black female matter?

PFC LaVena Johnson enlisted in the US Army wanting to make a difference in her life. She was raped and murdered July 19, 2005. She was the first female soldier from Missouri to die in Iraq. The US Army said she committed suicide. How does one commit suicide when their nose is broken, their eyes blacked and there are chemical burns on their genitals.

Ms. Johnson’s death was officially ruled a suicide by the Department of Defense. However, her father became suspicious when he saw her body in the funeral home and decided to investigate. Remember the condition of Emmet Till when his body was returned to his mother. The Army initially refused to release information, but did so under the Freedom of Information Act after Representative William Lacy Clay, Jr. raised questions about it at the congressional hearings over Pat Tillman’s death

The autopsy report and photographs revealed PFC Johnson had a broken nose, black eye, loose teeth, burns from a corrosive chemical on her genitals, and a gunshot wound that seemed inconsistent with suicide. Several reporters have suspected that the chemical burns were to destroy DNA evidence of a rape.

A spokesman from the House Armed Services Committee said in June 2008 that the committee was looking into Johnson’s death, but they were not yet committing to a formal investigation. Christopher Grey, chief of public affairs for the U.S. Criminal Investigative Command for the Army has said that the case remains closed as far as they are concerned.

When men who rape in the military are not prosecuted by military tribunals these men go on to rape once they are discharged. In The Career Rapist we discuss those veterans who once discharged went on to rape and murder 10 to 15 to 20 women in this country in Illinois, Washington, Florida and North Carolina.. We also discuss those men who raped and murdered while on duty and their crimes were later discovered after their discharge or suicide.

The Career Rapist Part One

Did you find apk for android? You can find new Free Android Games and apps.